By sheer bulk, this group represents a good fraction of the rock offspring trend. The O.K. Band has made quite a name for itself on the L.A. club circuit with its classic-rock sound, landing among Music Connection magazine's Hot 100 unsigned bands for 1997.

Currently, the quartet is recording demos for Ark 21 Records, although a deal has yet to be inked. "The name might get an A&R person to listen to the tape," says guitarist Waylon. "But when it comes down to it, it can also be a hindrance because people prejudge you and compare you with your old man."


Featuring scions of some of rock & roll's most influential players -- Berry Oakley, son of the original Allman Brothers bassist; Waylon Krieger, son of Doors-man Robby Krieger; and Duane Betts, sired by none other than Allmans' guitar monster Dickley Betts -- this combo has been cranking out a sound they call "blueternative music," drawing strong crowds and impressive guest talent (Robby Krieger frequently sits in on shows.) It's essentially an Allman-informed brand of blues/rock and Doors-associated covers, delivered with crunch and a veracity that prompts a new understanding of how pervasive the genetic code can be. 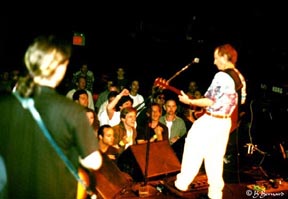 The story of how the band came together is a tale of fate. Childhood friends, Berry and Waylon grew up playing together. Since Waylon's dad, Door's guitarist Robby Krieger -- (Berry's godfather, by the way) -- had a studio full of guitars, they would hand around at Robby's and play music whenever they could.

After short turns in various Los Angeles bands, Berry (at 16 years old) hooked up with his late father Barry Oakley's band The Allman Brothers -- in 1989 he toured the U.S. as a guest bassist -- taking the same position his father did many years before, and hasn't stopped playing since.

Waylon Krieger also was playing around L.A. with various local bands. Hooking up again after Berry's Allman Brothers stint, the two found themselves playing together again for the Robby Krieger Band.

Next came Bloodline and all the hoopla that surrounds a major record label debut. Touring for four years with Bloodline (EMI Records), Berry and Waylon crisscrossed the country many times over playing clubs, theaters and major venues. Although a critical success with a number of charting single releases, the band eventually broke up. 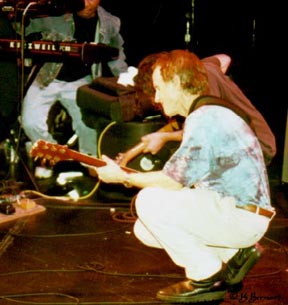 In1996 Barry and Waylon moved back to Los Angeles and started thinking about forming their own band. After a magical late night jam session with another childhood friend Duane Betts, Berry knew they had found what they were looking for. Originally a drummer, Duane had recently taken to the guitar, stunning the 500,000+ crowd at Woodstock '94 when he sat in with The Allman Brothers Band.

With the addition of Alec Puro, one of Los Angeles' hardest working and most sought after drummers, the band was ready to go. As their fathers had before them, they started by paying their dues working the live music clubs up and down the Sunset Strip. Several blistering performances at the Whiskey A Go-Go (The Doors regular haunt) landed them smack in the middle of the L.A., club scene.